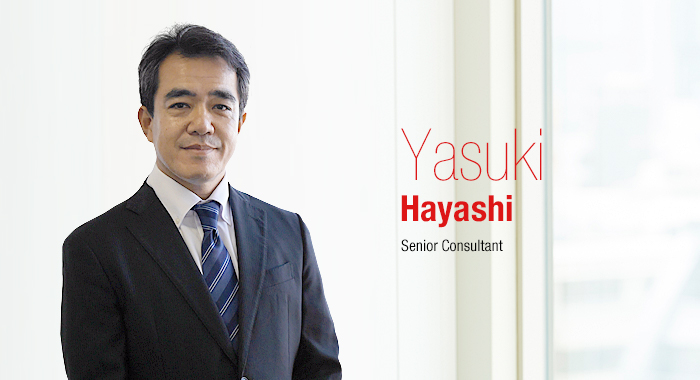 After graduating from the Faculty of Economics at Wakayama University in 1993, he joined Mitsubishi UFJ Bank (Sanwa Bank). For about 10 years, he experienced domestic corporate sales at four branches. In addition to loans and deposits, he provided financial support to client companies through securities and derivatives operations, helping them to raise funds and hedge risks related to interest rate and exchange rate fluctuations.

Hayashi was then transferred to a bank subsidiary, where he was engaged in retail business and channel strategy planning through the Internet. He planned and promoted internet business acquiring new card loan customers and expanding their usage which soon developed into the main channel.

Hayashi’s most recent role was in the planning section of the bank's headquarters, where he oversaw a subsidiary that was entrusted with reducing bank’s operational work, restructuring organization and human resource rations and promoting projects.

Hayashi joined Genius in January 2022. Based on his experience in corporate sales and banking subsidiaries, Hayashi believes human resource is the most important asset of a company and hopes to support his future clients by placing the right people in the right duties and roles.